Supported by the City of Stonnington, Creative Women in Conversation is Duldig Studio’s discussion series based around the exhibition SLAWA: modernist art + design. Inspired by the inventiveness of Slawa Horowitz-Duldig and presented by leading creative practitioners and local business women, the talks focus on themes represented in the exhibition and the links to contemporary art and design thinking and practice. We hope you enjoy the podcasts of these enlightening discussions.

Note about recordings: These are audio recordings from live discussions, therefore silences may exist in some podcasts during pauses in the conversation or when visual references were made during the discussion. 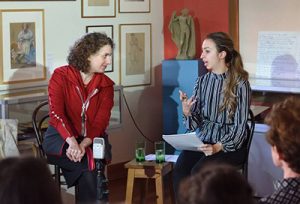 SPEAKER: Award-winning designer and artisan Susan Dimasi (pictured left) is the Creative Director of fashion house MATERIALBYPRODUCT. She established the brand in Melbourne in 2003 and has consistently delivered collections, described by fashion commentators as “a seamless blend of fashion and art”.
FACILITATOR: At the age of 20, Cr Jami Klisaris (pictured right) became Stonnington's youngest Councillor and the youngest female Councillor elected in the 2012 Victorian Local Government elections. In November 2016, Jami became Stonnington's youngest Mayor at 24, and was the youngest female Mayor in Victoria. Jami served as a board member for the Prahran Mission (non-for-profit) from November 2012 - March 2015. Jami was elected to the Municipal Association of Victoria (MAV) Board representing the Metro South East region in March 2017 for a 2 year term and then became the Metropolitan Deputy President. 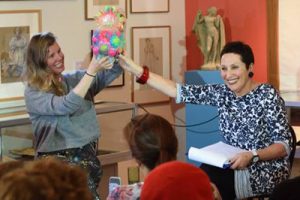 SPEAKER: Melbourne based artist Kate Rohde (pictured left) is an installation artist, sculptor, mixed media artist and painter. Her colourful and decorative work has been described as ‘quirky and innovative’. Kate has built on her Fine Arts background to explore jewellery and a ‘sculptural object based practice’. In 2015 she was a finalist in the Rigg Design Prize at the National Gallery of Victoria, has exhibited in the 2016 Biennial of Australian Art at the Art Gallery of South Australia and has collaborated with Sydney fashion house Romance was Born.
FACILITATOR: Leah Justin (pictured right) is co-founder of JAHM - Justin House Museum and a passionate collector of contemporary art. With her husband Charles, Leah set up JAHM to share their collection and their enthusiasm with the public and explore the links between contemporary art and ideas. Leah also co-ordinates Community Education at the Jewish Museum of Australia and public programs associated with the Museum’s temporary exhibitions. 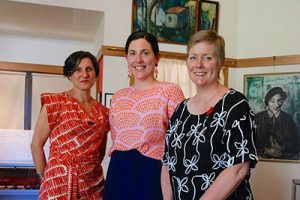 SPEAKER: Cassie Byrnes (pictured middle) describes her practice as well planned spontaneity. For her the creative process is inspired through capturing the essence and spirit of the theme. Her work reflects her love of colour and nature and looks at ways to incorporate the digital sphere without losing a design’s original integrity and handwriting. Cassie works across designing prints for a variety of applications including collaborations with Kuwaii, Country Road, Linen House, Milk & Sugar and Häagen Dazs and alos designs for her print focused lifestyle label Variety Hour.
FACILITATOR: Laura Jocic (pictured left) is an independent curator and fashion historian. From 2007 to 2012 she was a member of the curatorial team of Australian Fashion and Textiles at the National Gallery of Victoria. Laura also has expertise in Central Asian textiles and has lead five tours to Uzbekistan for Australians Studying Abroad. She was curator for the exhibition Louis Kahan: art, theatre, fashion at the Town Hall Gallery, Hawthorn, Melbourne in 2016. Laura is currently is undertaking a PhD at the University of Melbourne 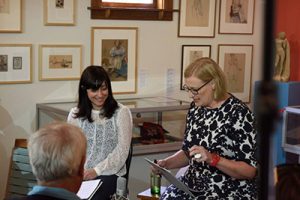 SPEAKER: Grazia Materia's (pictured left) firm, grazia&co aims to create custom furniture for both function and aesthetics, with a focus on artistic partnerships. They make crafted pieces to customised designs. As director, Grazia Materia has made it her mission to introduce 'mid century modernist furniture' design classics to interior designers and the interested public.
FACILITATOR: Jane Scott (pictured right), Art Consultant, is well qualified to talk about furniture design. Through her former role as CEO of Craft Victoria, Jane has worked with a  diverse range of artisans and crafts people over the years.  She is a great advocate for craft, design and the hand-made. Previous positions have included Director, Tarawarra Museum of Art, Director, Monash Gallery of Art, Executive Director, Regional Arts Australia and Cultural Attaché, Embassy of Australia, Washington DC. 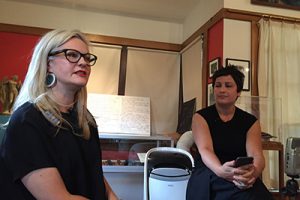 SPEAKER: Simone LeAmon (pictured left) is a multi-talented, multi skilled visual artist with a background in sculpture and industrial design. She describes herself as a "storyteller - engaged in an ongoing project of designing, making, curating and writing.” She is also an industry consultant (Carter LeAmon Design and Architecture Studio) and writer.
Simone is currently Curator of Contemporary Design and Architecture at the National Gallery of Victoria and a lecturer in the Industrial Design program at RMIT University as well as adjunct lecturer at Monash University MADA.
FACILITATOR: Helen Kontouris (pictured right) draws her inspiration for her furniture design company (Helen Kontouris Design, opened in 2001) from her observations of people’s interactions with objects and informed by her years of extensive travel. For each project she does extensive research and designs her furniture with a focus on the process as opposed to any predetermined notions of design.
Kontouris has established herself as one of Australia’s most outstanding designers, awarded with the title of Designer of the Year (IDEA), ‘Luminary in Design’™ (InDesign Magazine) and 'Best Designer'™ (Urbis). 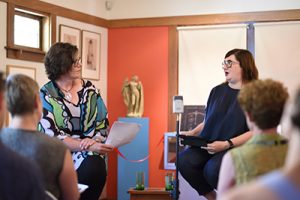 SPEAKER: Claire Beale (pictured right) is a textile designer, program manager and lecturer in the BA textile design program in the School of Fashion and Textiles, RMIT University. She is also National President Elect of the Design Institute of Australia. Claire’s interests lie in extending the concept of design practice, and the ways in which contemporary designers work across disciplines to curate/ design events.
FACILITATOR: Michelle Murray (pictured left) is the Creative Director of the Murray Betts Group. With photographer Phillip Betts, they join the disciplines of graphic design and photography for inspired design solutions. Michele also teaches in the School of Design at Swinburne University. 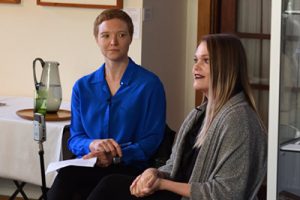 SPEAKER: Emily Siddons (pictured right)  is an exhibitions producer at Museum Victoria. A musician with Paper House she specialises in ‘curating and producing contemporary art, sound art, performance and diverse experiences.’ She is an Associate Curator with Liquid Architecture, ‘an Australian organisation for artists working with sound. LA investigates the sounds themselves, but also the ideas communicated about, and the meaning of, sound.’ Emily has also been the curator & producer of White Night 2013 & 2014 (NGV), 2015-16 (ACMI) and founder and producer of the NGV's Friday Nights series, Monet's Garden 2013, Melbourne Now 2014, Italian Masterpieces 2014 and The Fashion World of Jean Paul Gaultier 2014 amongst other events and performances.
FACILITATOR: Emma McRae (pictured left) is a curator and writer whose work explores the intersections of art, technology and urban sociology. From 2008-2017 Emma was Curator at the Australian Centre for the Moving Image. From 2004-2008 Emma was Project Manager & Associate Curator at Experimenta Media Arts, Emma has also curated screening programs for organisations including Next Wave, Sydney Film Festival, and Urban Screens Melbourne. Emma also writes and has been published in exhibition catalogues and publications including RealTime, un. magazine, Assemble Papers, Broadsheet Journal, and art.es. 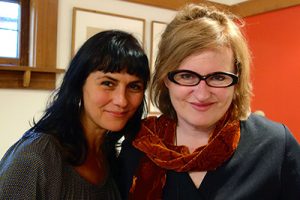 SPEAKER Monique di Mattina (pictured left) is a singer, songwriter, composer, pianist and mother. She also teaches jazz piano and song-writing at Victorian College of the Arts Melbourne. Monique divides her time between Melbourne and New York and is well placed to talk on creativity and the challenges facing women in the creative arts field today.
FACILITATOR Fiona Gruber (pictured right) is a journalist, radio presenter and writer. She writes regularly on the arts for Australian and British magazines, presents on the ABC and 3RRR and through her arts shows and innovations like ‘Gert’s Sunday Salon’- awarded a Green Room award in 2005 - contributes to debate on the arts and Australian cultural life.

Creative Women in Conversation is supported by the City of Stonnington